Computers Can Predict Schizophrenia Based on How a Person Talks 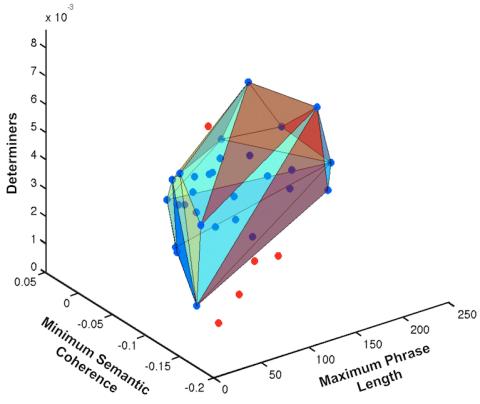 ...Most of the time, people don’t actively track the way one thought flows into the next. But in psychiatry, much attention is paid to such intricacies of thinking. For instance, disorganized thought, evidenced by disjointed patterns in speech, is considered a hallmark characteristic of schizophrenia. Several studies of at-risk youths have found that doctors are able to guess with impressive accuracy—the best predictive models hover around 79 percent—whether a person will develop psychosis based on tracking that person’s speech patterns in interviews.

A computer, it seems, can do better.

That’s according to a study published Wednesday by researchers at Columbia University, the New York State Psychiatric Institute, and the IBM T. J. Watson Research Center in the Nature Publishing Group journal Schizophrenia. They used an automated speech-analysis program to correctly differentiate—with 100-percent accuracy—between at-risk young people who developed psychosis over a two-and-a-half year period and those who did not. The computer model also outperformed other advanced screening technologies, like biomarkers from neuroimaging and EEG recordings of brain activity.

“We know that thought disorder is an early core feature of schizophrenia evident before psychosis onset. The main question then is: What are the brain mechanisms underlying this abnormality in language? And how might we intervene to address it and possibly improve prognosis? Could we improve the concurrent language problems and function of children and teenagers at risk, and either prevent psychosis or at least modify its course?”
—Cheryl Corcoran, an assistant professor of clinical psychiatry at Columbia University.

Read the full article on The Atlantic